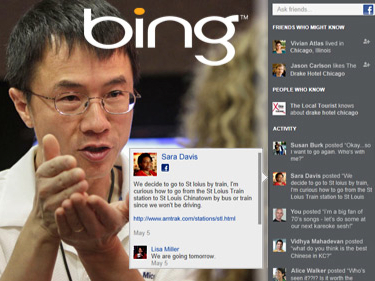 Microsoft has unveiled a major update to its Bing search engine. The update is the most significant since Microsoft launched Bing three years ago. The new version of Bing will be rolling out over the coming weeks and will be broadly available in the U.S. in early June.

Bing has incorporated a social component to its search,and is pulling data from social sites like Facebook and Twitter. Microsoft insists the new Bing takes advantage of the new Web. “People are using the Web to do things in the real world, and that’s a big change from where things were a decade ago,” says Bing senior director Stefan Weitz. “And so the 10 blue links that search has been predicated on for the last decade no longer makes sense.” 10 blue links. Hey Google, hear that?

The update enables users to get advice and recommendations from friends and experts with the new social sidebar, displayed in a third column, separate from main Web results page.  A new snapshot feature, with results all in one place in a separate column,  lets users take a quick look at action-oriented information. Users can complete tasks by viewing information related to their searches and compiled by Bing as a single “snapshot”.

Bing also gets a user interface overhaul, and moves to a three-column design. While engineers worked to improve performance, a team of about 20 designers revamped the user interface to make it simpler and cleaner. “It’s really a completely different user interface,” says Sally Salas, a lead program manager at Microsoft.

Qi Lu (President,  Online Services Division, Microsoft): Increasingly, the Web is about much more than simply finding information by navigating a topically organized graph of links.

Microsoft says the Bing updates were developed in response to user research. More than two-thirds of consumers use search to accomplish tasks, according to a Microsoft user survey. Yet 60 percent wonder whether they have found the best information available for what they’re trying to do, and 52 percent find themselves entering multiple queries and visiting lots of sites for searches that shouldn’t be so hard.

How Real People Use Search

Eighty-four percent of consumers expect search to save them time, and 77 percent want search to help them accomplish tasks quickly, according to a Fall 2011 Microsoft survey of more than 1,400 customers.

Yet consumers continue to suffer from less than optimal search results and an overwhelming amount of data: