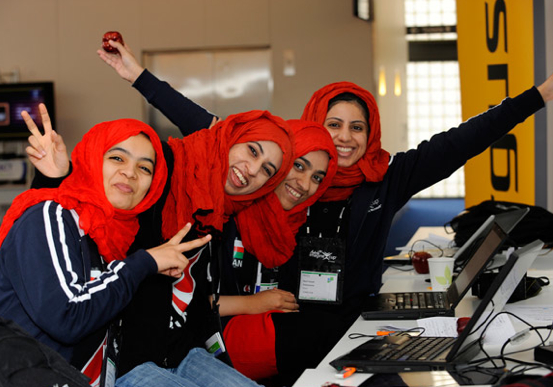 Microsoft announced the winners of the 10th annual Imagine Cup, Microsoft’s student technology competition. Twenty-three percent of Imagine Cup projects this year were created to improve the lives of individuals with disabilities such as visual and hearing impairments and diseases that limit a human’s physical mobility.

Software and Game Design Winners at Imagine Cup 2012: Team quadSquad from the Ukraine took top honors in the Software Design Competition with its device, Enable Talk, which uses a pair of gloves equipped with 15 flex sensors and a microcontroller that continuously recognize sign language patterns, which are then transmitted via Bluetooth to a Windows Phone device that uses the Microsoft Speech API and Bing API to translate the signs into audio.

The following are the respective winners in the core Imagine Cup Competitions:

Other Awards
The Imagine Cup 2012 competition winners were announced at the Imagine Cup World Festival and Awards Ceremony at the Sydney Convention and Exhibition Centre, in front of 106 student teams. The event was the culmination of a five-day celebration of technology, teamwork and innovation. More than 350 students from 75 countries traveled to Sydney after competing in local and online events. Cash prizes totaling approximately $175,000 were awarded across eight competition categories. Imagine Cup 2012 sponsors included Avanade, Bing, Bradesco, Coca-Cola, Microsoft Studios, Nokia and Windows.
Russia will host the 11th annual Imagine Cup in St. Petersburg in July 2013.