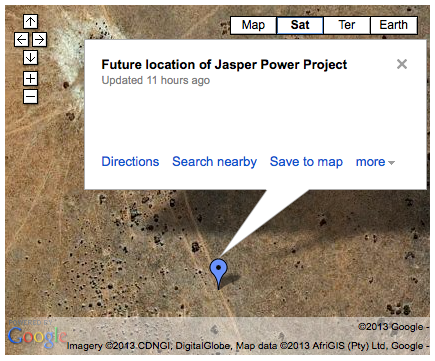 Google just closed its first investment in Africa. The company invested $12 million (around 103 million Rand) in the Jasper Power Project, a 96 megawatt solar photovoltaic plant in the Northern Cape province of South Africa. Upon completion, Jasper will be one of the largest solar installations on the continent, capable of generating enough electricity to power 30,000 South African homes, says Google.

The project, developed and funded by SolarReserve, Intikon Energy and the Kensani Group, is also backed by Rand Merchant Bank, the Public Investment Corporation, Development Bank of South Africa and the PEACE Humansrus Trust.

Rick Needham (Director, Energy & Sustainability, Google): When we consider investing in a renewable energy project, we focus on two key factors. First, we only pursue investments that we believe make financial sense. Second, we look for projects that have transformative potential—that is, projects that will bolster the growth of the renewable energy industry and move the world closer to a clean energy future.

Google has committed more than $1 billion to renewable energy investments.