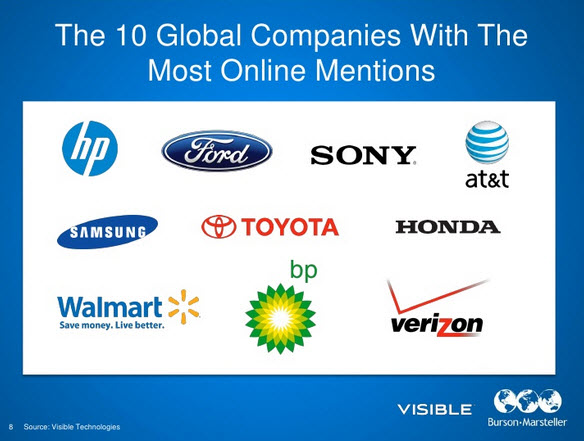 Companies in the Fortune Global 100 were mentioned a total of 10,400,132 times online during a month-long period. The majority of these mentions happened on Twitter, according to the third annual Burson-Marsteller Global Social Media Check-Up which includes new data provided by Visible Technologies.

In 2012, the vast majority of companies (87 percent) are using at least one of the major social platforms to communicate with online stakeholders with by far the largest growth in corporate usage occurring on YouTube. The study found there has been a 39 percent jump in the percentage of companies with a branded YouTube channel. Seventy-nine percent of companies in the study are now using a branded YouTube channel compared to 57 percent in 2011. These channels each average more than two million views and 1,669 subscribers.

Still, the study found that Twitter is the most popular platform for both companies and for online discussions about these companies. Indeed, 82 percent of Fortune Global 100 companies have at least one Twitter account, while each company was mentioned an average of 55,970 times on Twitter.

“People want to interact and connect with these major companies, and these platforms are the bridge directly to the heart of these organizations,” said Burson-Marsteller Chief Global Digital Strategist Dallas Lawrence. “What’s even more impressive is how much companies are engaging back with followers. Seventy-nine percent of corporate accounts attempt to engage on Twitter with retweets and @-mentions, and 70 percent of corporate Facebook pages are responding to comments on their walls and timelines.”

Other key findings include: