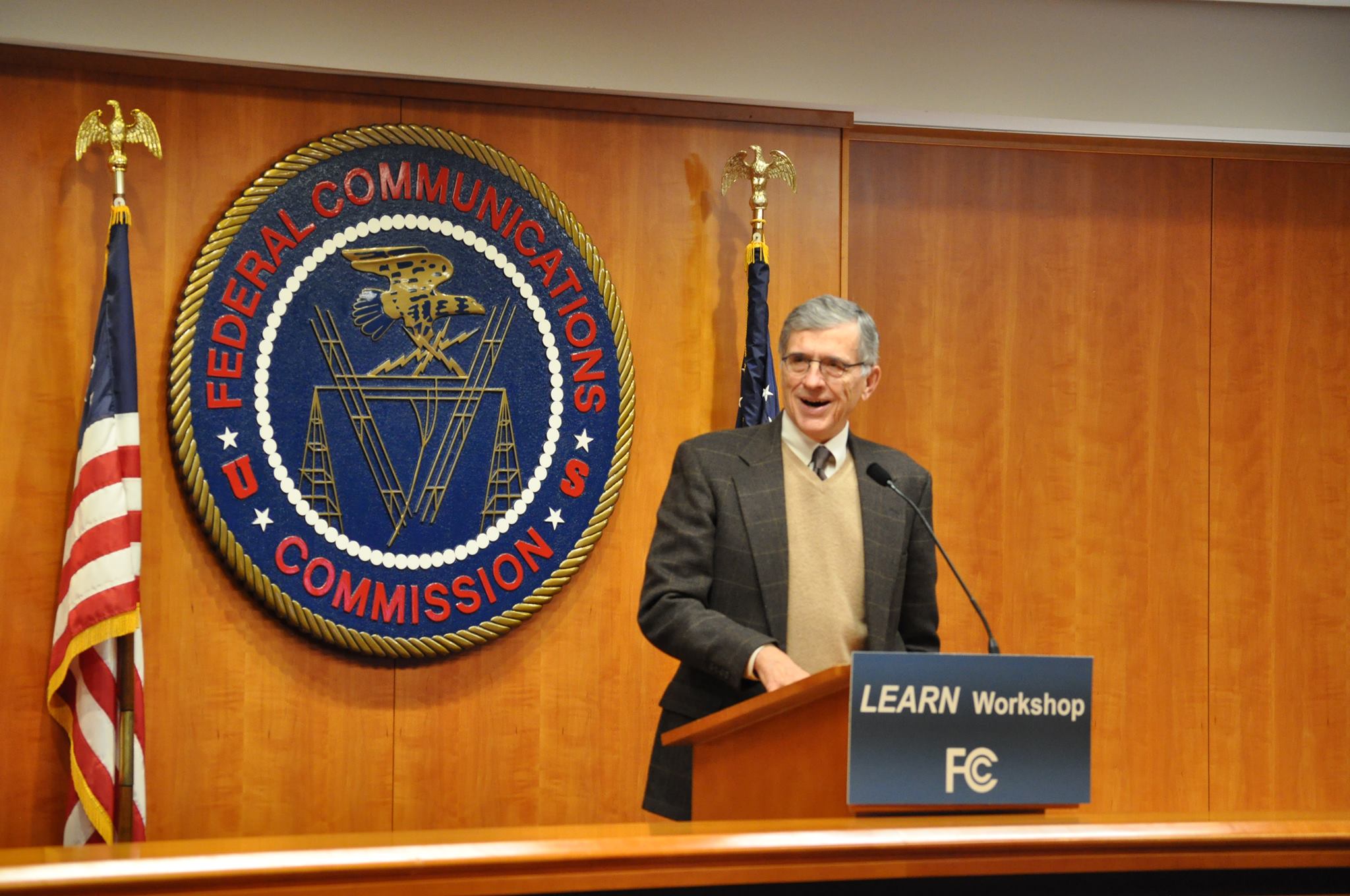 Read a piece by Steve Lohr on the New York Times here. Mr. Wheeler also wrote an opinion piece on Wired, which you may find interesting.

Here is the text of the FCC proposal (highlights are mine):

Chairman Wheeler is proposing clear, sustainable, enforceable rules to preserve and protect the open Internet as a place for innovation and free expression.  His common-sense proposal would replace, strengthen and supplement FCC rules struck down by the U.S. Court of Appeals for the District of Columbia Circuit more than one year ago. The draft Order supports these new rules with a firm legal foundation built to withstand future challenges. The Chairman’s comprehensive proposal will be voted on the FCC’s February 26 open meeting.

An open Internet allows consumers to access the legal content and applications that they choose online, without interference from their broadband network provider. It fosters innovation and competition by ensuring that new products and services developed by entrepreneurs aren’t blocked or throttled by Internet service providers putting their own profits above the public interest. An open Internet allows free expression to blossom without fear of an Internet provider acting as a gatekeeper. And it gives innovators predictable rules of the road to deliver new products and services online.

The Chairman’s proposal provides the strongest legal foundation for the Open Internet rules by relying on multiple sources of authority: Title II of the Communications Act and Section 706 of the Telecommunications Act of 1996.  In doing so, the proposal provides the broad legal certainty required for rules guaranteeing an open Internet, while refraining (or “forbearing”) from enforcing provisions of Title II that are not relevant to modern broadband service.  Together Title II and Section 706 support clear rules of the road, providing the certainty needed for innovators and investors, and the competitive choices and freedom demanded by consumers.

First, the Chairman’s proposal would reclassify “broadband Internet access service”—that’s the retail broadband service Americans buy from cable, phone, and wireless providers—as a telecommunications service under Title II. We believe that this step addresses any limitations that past classification decisions placed on our ability to adopt strong Open Internet rules, as interpreted by the D.C. Circuit in the Verizon case last year.  But just in case, we also make clear that if a court finds that it is necessary to classify the service that broadband providers make available to “edge providers,” it too is a Title II telecommunications service.  (To be clear, this is not a “hybrid”— both the service to the end user and to the edge provider are classified under Title II.)

Second, the proposal finds further grounding in Section 706 of the Telecommunications Act of 1996.  Notably, the Verizon court held that Section 706 is an independent grant of authority to the Commission that supports adoption of Open Internet rules.  Using it here—without the limitations of the common carriage prohibition that flowed from earlier classification decisions—bolsters the Commission’s authority.

Finally, Title II’s “just and reasonable” standard and the Verizon court’s finding that Section 706 authorizes the FCC to protect the “virtuous circle” of network innovation and infrastructure development provide standards for the FCC to protect Internet openness against new tactics that would close the Internet.

While the FCC’s 2010 open Internet rules had limited applicability to mobile broadband, the new rules – in their entirety – would apply to mobile broadband, recognizing advances in technology and the growing significance of wireless broadband access in recent years. Today, 55 percent of Internet traffic is carried over wireless networks.  This proposal extends protection to consumers no matter how they access the Internet, whether they on their desktop computer or their mobile devices.

Bright Line Rules:  The first three rules would ban practices that are known to harm the Open Internet:

No Throttling: broadband providers may not impair or degrade lawful Internet traffic on the basis of content, applications, services, or non-harmful devices.

No Paid Prioritization: broadband providers may not favor some lawful Internet traffic over other lawful traffic in exchange for consideration – in other words, no “fast lanes.”  This rule also bans ISPs from prioritizing content and services of their affiliates.

A Standard for Future Conduct:  Because the Internet is always growing and changing, there must be a known standard by which to determine whether new practices are appropriate or not. Thus, the proposal would create a general Open Internet conduct standard that ISPs cannot harm consumers or edge providers.

Greater Transparency:  The rules described above would restore the tools necessary to address specific conduct by broadband providers that might harm the Open Internet.  But the Chairman’s proposal also recognizes the critical role of transparency in a well-functioning broadband ecosystem.  The proposal enhances existing transparency rules, which were not struck down by the court.

Reasonable Network Management:    For the purposes of the rules, other than paid prioritization, an ISP may engage in reasonable network management. This recognizes the need of broadband providers to manage the technical and engineering aspects of their networks.

In assessing reasonable network management, the Commission’s proposed standard would take account of the particular engineering attributes of the technology involved—whether it be fiber, DSL, cable, unlicensed wireless, mobile, or another network medium.

However, the network practice must be primarily used for and tailored to achieving a legitimate network management—and not commercial—purpose.  For example, a provider can’t cite reasonable network management to justify reneging on its promise to supply a customer with “unlimited” data.

Some data services do not go over the public Internet, and therefore are not “broadband Internet access” services subject to Title II oversight (VoIP from a cable system is an example, as is a dedicated heart-monitoring service). The Chairman’s proposal will ensure these services do not undermine the effectiveness of the open Internet rules. Moreover, broadband providers’ transparency disclosures will continue to cover any offering of such non-Internet data services —ensuring that the public and the Commission can keep a close eye on any tactics that could undermine the Open Internet rules.

For the first time the Commission would have authority to hear complaints and take appropriate enforcement action if necessary, if it determines the interconnection activities of ISPs are not just and reasonable, thus allowing it to address issues that may arise in the exchange of traffic between mass-market broadband providers and edge providers.

Congress requires the FCC to refrain from enforcing – forbear from – provisions of the Communications Act that are not in the public interest. The proposed Order applies some key provisions of Title II, and forbears from most others.  There is no need for any further proceedings before the forbearance is adopted.  The proposed Order would apply fewer sections of Title II than have applied to mobile voice networks for over twenty years.

Major Provisions of Title II that  the Order WILL APPLY:

Ensures fair access to poles and conduits under Section 224, which would boost the deployment of new broadband networks

Protects people with disabilities under Sections 225 and 255

Bolsters universal service fund support for broadband service in the future through partial application of Section 254.

Rate regulation: the Order makes clear that broadband providers shall not be subject to tariffs or other form of rate approval, unbundling, or other forms of utility regulation

The Order will not impose, suggest or authorize any new taxes or fees – there will be no automatic Universal Service fees applied and the congressional moratorium on Internet taxation applies to broadband.

Fostering Investment and Competition
All of this can be accomplished while encouraging investment in broadband networks. To preserve incentives for broadband operators to invest in their networks, Chairman Wheeler’s proposal will modernize Title II, tailoring it for the 21st century, encouraging Internet Service Providers to invest in the networks American increasingly rely on.

The proposed order does not include utility-style rate regulation

No rate regulation or tariffs

A Case Study: Investment in the Wireless Industry

Fewer provisions will apply to ISPs than were applied to wireless carriers.

When Title II was first applied to mobile, voice was the predominant mobile service.  During the period between 1993 and 2009, carriers invested heavily, including more than $270 billion in building out their wireless networks, an increase of nearly 2,000%.