More
Home Industry There are 8.1bn connected devices in the world, estimates IHS 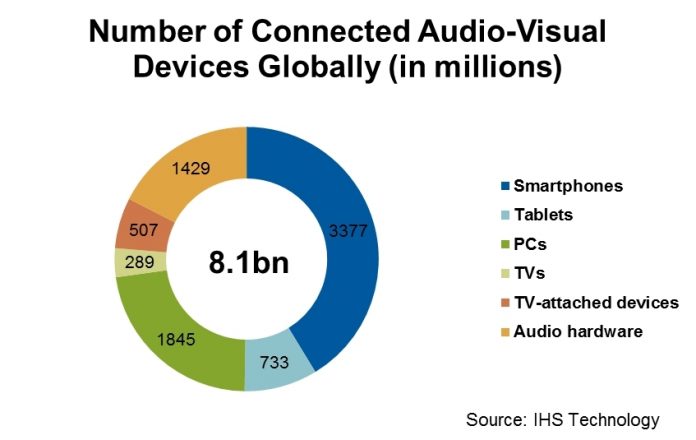 As of year-end 2015, the world contains 8.1 billion connected smartphones, tablets, personal computers, TVs, TV-attached devices, and audio devices, according to the Connected Device Market Monitor from IHS. On average, across the globe, this device base equates to four devices per household.

Smartphones outnumber tablets by five to one

Year-on-year, smartphones contribute roughly half a billion new devices to the market; tablet and OTT set-tops are also growing quickly, but operate a full order of magnitude below the smartphone. By 2020, this ratio will only widen, according to IHS. Within the forecast period, the smartphone-to-tablet ratio rises to nearly 10:1.

For all its early momentum, Chromecast had been unable to out-ship the Apple TV, says IHS. This finally changed during the first quarter of 2016 with Apple TV shipping 1.7 million units compared to Google pushing 3.2 million Chromecasts to market. “We anticipate that this reversal will persist,” said Merrick Kingston, principal analyst-connected home, at IHS Technology. “Since the introduction of the fourth-generation Apple TV, Apple and Google have pursued vastly different strategies.”

The Apple TV, starting at $149, has inexorably been shuttled into the segment’s top end. The device is now positioned as a premium hub that appeals to consumers of digital video, to casual gamers and to iOS owners who are intrinsically attracted to Apple’s singular user-interface.

Chromecast, at $35, a veritable bargain, complements portable Android devices and offers a no-frills casting experience that obviates the very need for a user-interface.

As of year-end 2015, Netflix addresses 339 million connected devices in the U.S. As a fraction of the total U.S. installed base, this is equivalent to addressing 32 percent of the audio-visual hardware landscape.

“Netflix’s reach is a testament to the company’s unrivalled device strategy,” Kingston said. “The service’s ubiquity turns Netflix into a de facto rival – and on occasion complement – to any other given video offering in the U.S.”

The days when a multiscreen pay TV service could uniquely lay claim to a device or platform are effectively gone, according to IHS. Pay TV media apps are virtually guaranteed to sit alongside the Netflix application on consumers’ end devices.