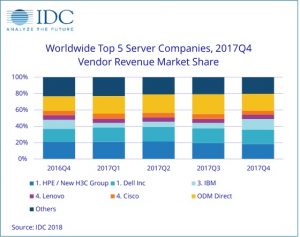 According to the IDC Worldwide Quarterly Server Tracker, vendor revenue in the worldwide server market increased 26.4% year over year to $20.7 billion in the fourth quarter of 2017 (4Q17).

The server market continues to gain momentum, as traction for newer Purley- and EPYC-based offerings grows, according to IDC. While demand from cloud service providers has propped up overall market performance, other areas of the server market continue to show growth now as well. Worldwide server shipments increased 10.8% year over year to 2.84 million units in 4Q17, according to IDC.

Hyperscalers remained a central driver of volume demand in the fourth quarter with companies such as Amazon, Facebook, and Google continuing their datacenter expansions and updates, says IDC. ODMs continue to be the primary beneficiaries from hyperscale server demand.

Some OEMs are also finding growth in hyperscalers, but the competitive dynamic of this market has also driven many OEMs such as HPE to focus on the enterprise, says IDC. For example, HPE/New H3C Group grew 38.6% and 114.6% in High-End and Midrange Enterprise Servers, respectively.

Other highlights in the quarter include robust growth from Dell, which continues to capitalize on expanded opportunities from its merger with EMC, and IBM, which experienced another successful quarter from its refreshed system z business.

HPE’s share and year-over-year growth rate includes revenues from the H3C joint venture in China that began in May of 2016; thus, the reported HPE/New H3C Group combines server revenue for both companies globally.

IBM captured the third market position at 13.0% share with revenue growing 50.3% year over year to $2.7 billion.