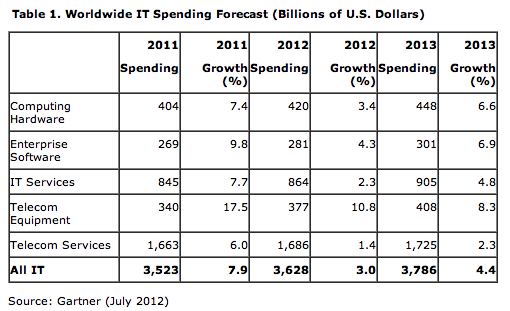 Worldwide IT spending is on pace to reach $3.6 trillion in 2012, a 3 per cent increase from 2011 spending of $3.5 trillion, according to the latest outlook by Gartner. Gartner’s 2012 IT spending outlook has been revised up slightly from the 2.5 percent projection last quarter.

“While the challenges facing global economic growth persist — the eurozone crisis, weaker U.S. recovery, a slowdown in China — the outlook has at least stabilized,” said Richard Gordon, research vice president at Gartner. “There has been little change in either business confidence or consumer sentiment in the past quarter, so the short-term outlook is for continued caution in IT spending.”

Worldwide IT services spending is forecast to reach $864 billion in 2012, a 2.3 percent increase from 2011. Demand for consulting services is expected to remain high due to the complexity of environments for global business and technology leaders. Gartner analysts said consulting itself is becoming increasingly technology-based with the rise of analytics and big data, having deep implications on the future of consulting services.

The global telecom services market continues to be the largest IT spending market. Telecom services growth is expected to come not only from net connections, especially in emerging markets, but also in mature markets from the uptake of multiple connected devices, such as media tablets, gaming and other consumer electronics devices.

Gartner’s global IT spending forecast is based upon market segments analysis by more than 200 Gartner business and technology analysts who are located in all regions of the world.