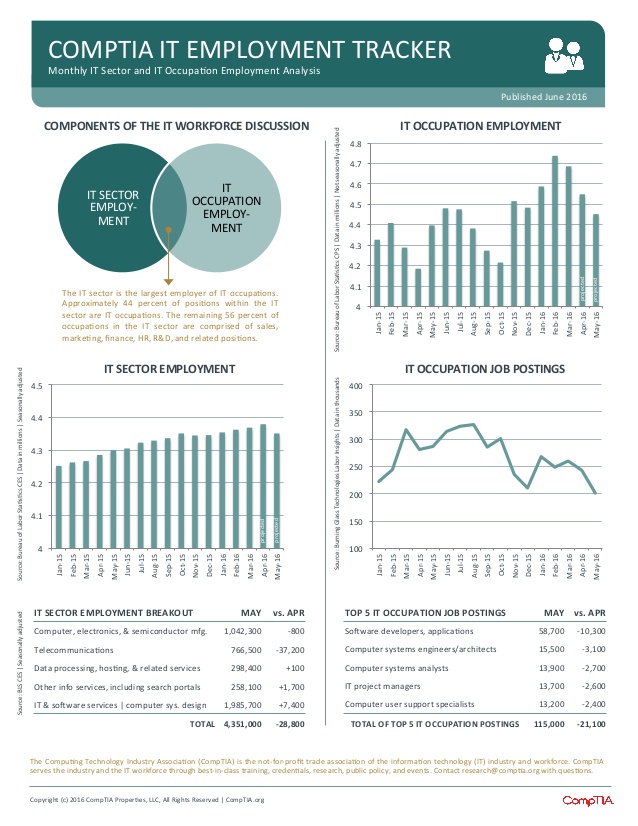 Employment in the U.S. information technology (IT) sector fell by 28,800 jobs in May, according to an analysis of Bureau of Labor Statistics data by CompTIA.

May’s decline reversed the jobs gains the sector had realized through the first four months of 2016, when 24,400 jobs were added. IT sector employment was estimated at 4.351 million workers as of May 31.

“Much like the rest of the May jobs report, it was a down month for both IT sector and IT occupation employment,” said Tim Herbert, senior vice president, research and market intelligence, CompTIA. “While there continues to be strong demand for IT professionals – their unemployment rate remains about half of the national average – the data indicates some employers are holding off on adding additional headcount or reassessing their IT skills needs.”

Telecommunications accounted for the biggest decline in May, shedding 37,200 positions. Much of that total – about 35,000 – were telecommunications industry workers who were on strike and not on company payrolls during the month.

Small gains were reported last month in other information services, including search portals, which grew by 1,700 jobs; and data processing, hosting and related services, which added 100 jobs.

Computer and electronic products manufacturing lost 800 jobs in May.

While every job posting does not result in a new hire, and companies often will have multiple postings for a single position, the job posting data is another indicator of where companies are focusing their technology efforts and investments.