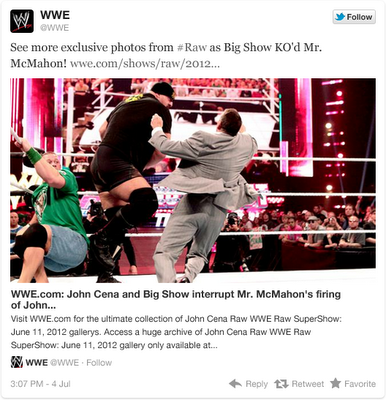 Twitter has launched expanded tweets, thats lets you expand tweets containing links to partner websites, so you can see content previews, view images or play videos, right from Twitter itself.

You can already check out Instagram pictures or YouTube videos from Twitter, but now we can also check out rich content from Twitter’s partners like the The Wall Street Journal, Breaking News, or TIME.  When you expand a Tweet linking to a news article by The New York Times, for example, you can see a preview with the headline, the introduction and sometimes the Twitter accounts of the publisher and writer. You can continue to read the article, follow these accounts, and reply, favorite or retweet the Tweet.

You can also see exclusive photos from inside the WWE ring, or images from sources like BuzzFeed and TMZ. You can even watch moments from your favorite television shows like BET’s 106 & Park and play video from partners like Lifetime and Dailymotion.

Expanded tweets have begun rolling out to users on both the Twitter Web and mobile sites, and will be soon available on Twitter for iPhone and Twitter for Android.