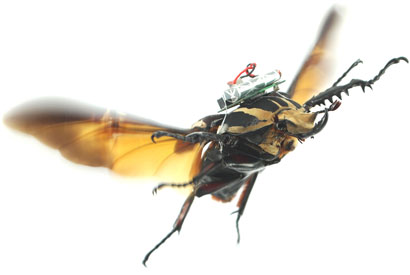 Cyborg insect researchers at UC Berkeley and Singapore’s Nanyang Technological University (NTU) trapped tiny computers and wireless radios onto the backs of giant flower beetles, recording neuromuscular data as the bugs flew untethered. The scientists say that by doing this, they determined a muscle known for controlling the folding of wings was also critical to steering. They then used that information to improve the precision of the beetles’ remote-controlled turns.

In particular, the researchers said, it had been difficult to elucidate the role that smaller muscles play in fine steering. What the new study found was that the coleopteran third axillary sclerite (3Ax) muscle, found in the articulation of insect wings, plays a key function in the beetle’s ability to steer left or right. The researchers tested the function of this muscle by stimulating it during flight for graded turns that were more controlled than previous versions of the cyborg beetle.

The beetle backpack is made up of a tiny, off-the-shelf microcontroller and a built-in wireless receiver and transmitter. Six electrodes are connected to the beetle’s optic lobes and flight muscles. The entire device is powered by a 3.9-volt micro lithium battery and weighs 1 to 1.5 grams. During test flights, signals were transmitted to the beetle backpack every millisecond, directing the beetles to take off, turn left or right, or even hover in mid-flight. The beetles were untethered but in a closed room equipped with eight 3-D motion-capture cameras. Experiments were done with Mecynorrhina torquata, or giant flower beetles. They averaged 6 centimeters in length and 8 grams in weight, about as heavy as a $1 coin.

This work was supported by the Nanyang Assistant Professorship and the Agency for Science, Technology and Research in Singapore, and the National Science Foundation in the United States.