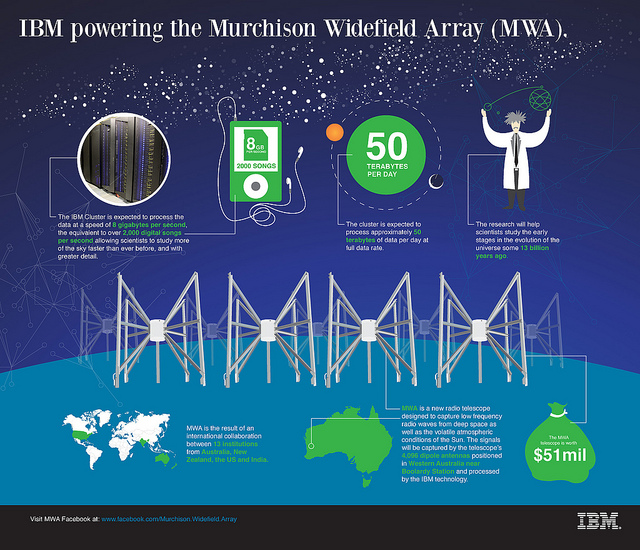 The Victoria University of Wellington at New Zealand, on behalf of the Murchison Widefield Array (MWA) Consortium, has selected IBM systems technology to help scientists probe the origins of the universe.

The result of an international collaboration between 13 institutions from Australia, New Zealand, U.S. and India, the MWA is a new type of radio telescope designed to capture low frequency radio waves from deep space as well as the volatile atmospheric conditions of the Sun. The signals will be captured by the telescope’s 4,096 dipole antennas positioned in the Australian Outback in a continuous stream and processed by an IBM iDataPlex dx360 M3 computing cluster that will convert the radio waves into wide-field images of the sky that are unprecedented in clarity and detail.

The IBM iDataPlex cluster replaces MWA’s existing custom-made hardware systems and will enable greater flexibility and increased signal processing. The cluster is expected to process approximately 50 terabytes of data per day at full data rate at a speed of 8 gigabytes per second, the equivalent to over 2,000 digital songs per second, allowing scientists to study more of the sky faster than ever before, and with greater detail.

The ultimate goal of the revolutionary $51 million MWA telescope is to observe the early Universe, when stars and galaxies were first born. By detecting and studying the weak radio signals emitted from when the Universe consisted of only a dark void of Hydrogen gas – the cosmic Dark Age – scientists hope to understand how stars, planets and galaxies were formed. The telescope will also be used by scientists to study the sun’s heliosphere during periods of strong solar activity and time-varying astronomical objects such as pulsars.

The MWA project is led by the International Centre for Radio Astronomy Research at Curtin University and is one of three SKA precursor telescopes.