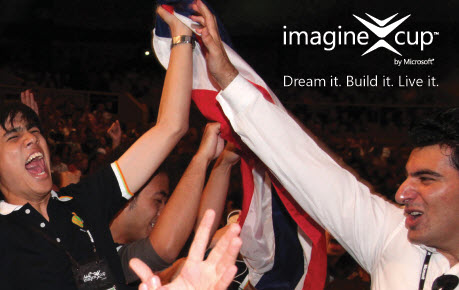 Students ages 16 and older can now register for the eleventh edition of the Microsoft Imagine Cup 2013 student technology competition. This time around,  Microsoft  has redesigned Imagine Cup around three new core competitions — World Citizenship, Games and Innovation — and more than doubled the prize money to $300,000.

In Imagine Cup 2013, students may compete in the following competitions:

• World Citizenship. Honors  software application developed on Microsoft platforms with potential to make a positive impact on humanity. For example, a project might address education-, social- or healthcare-related problems.

• Innovation. Honors apps that give consumers inspiration and innovation; whether it be a new spin on social networks, online shopping or search, built with Microsoft tools and technology.

Students can also register to compete in online Challenges focused on specific technologies and platforms, including Windows 8, Windows Azure and Windows Phone.

Imagine Cup is a global, yearlong competition that culminates in a Worldwide Finals event, to take place in St. Petersburg, Russia, July 8–11, 2013. Worldwide finalists will also have the chance to apply for Microsoft Imagine Cup Grants as part of a three-year, $3 million investment by Microsoft.

More than 1.65 million students across the globe have participated in Imagine Cup during the past decade.