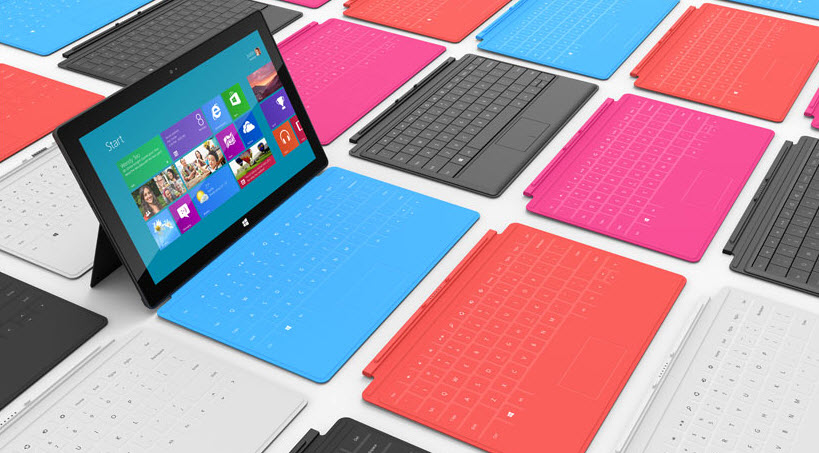 Microsoft has unveiled its take on tablets, the Surface: PCs, “built to be the ultimate stage for Windows.” Two models of Surface will be available: one running an ARM processor featuring Windows RT, and one with a third-generation Intel Core processor featuring Windows 8 Pro.  Surface for Windows RT will release with the general availability of Windows 8, and the Windows 8 Pro model will be available about 90 days later.

How much will the Surface PCs cost? Microsoft is expected to reveal specific details closer to availability, but the price is expected to be competitive with a comparable ARM tablet or Intel Ultrabook-class PC. OEMs will have cost and feature parity on Windows 8 and Windows RT.

The casing of Surface is created using  VaporMg (pronounced Vapor-Mag), a combination of material selection and process to mold metal and deposit particles that creates a finish akin to a luxury watch. Starting with magnesium, parts can be molded as thin as .65 mm, thinner than the typical credit card. Surface sports a full-sized USB port and a 16:9 aspect ratio. It has edges angled at 22 degrees, a natural position for the PC at rest or in active use, and comes with a built-in kickstand for support when needed.

The 3 mm Touch Cover, coming in a range of vibrant colors like pink or turquoise,  uses a pressure-sensitive technology, sensing keystrokes as gestures. The Touch Cover clicks into Surface via a built-in magnetic connector, forming a natural spine like you find on a book, and works as a protective cover. You can also click in a 5 mm-thin Type Cover that adds moving keys for a more traditional typing feel.