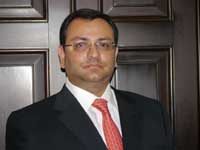 The board of directors of Tata Sons has appointed Cyrus P. Mistry as Deputy Chairman. He will work with the current chairman Ratan N. Tata over the next year and take over from him when Mr Tata retires in December 2012. This is as per the unanimous recommendation of the selection committee.

Mistry, currently managing director, Shapoorji Pallonji Group, has been a director of Tata Sons since August 2006. He is a graduate of civil engineering from Imperial College, London, and has a master of science in management from the London Business School.

The Tata group is India’s biggest business group, and contributes some 7 per cent to the country’s total GDP. The group has considerable IT and telecom interests, and owns Tata Consulting Services (TCS), Tata Communications, Tata Elxsi, among others. The appointment comes after about a year of speculation.