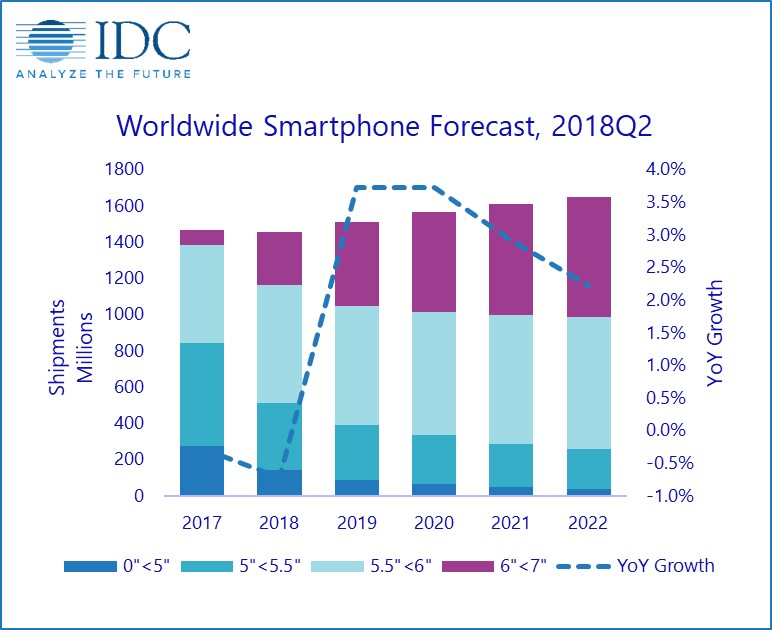 While the worldwide smartphone market is expected to decline again in 2018, IDC says it believes the market will experience low single-digit growth from 2019 through the end of its forecast in 2022.

The International Data Corporation (IDC) Worldwide Quarterly Mobile Phone Tracker forecasts worldwide smartphone shipments to decline 0.7% in 2018 to 1.455 billion units, down from 1.465 billion in 2017. However, IDC says, the market will return to positive growth in the second half of 2018 with volumes up 1.1% compared to the second half of 2017. In the long-term forecast, IDC expects the overall smartphone market to reach 1.646 billion units shipped in 2022.

Overall, the global smartphone market is healthy and has plenty of upside, which is noted by the return to growth in the forecast, says IDC. When breaking down the growth by device type, it is clear that large-screen smartphones (5.5 inch and larger) will lead the charge with volumes of 941.6 million in 2018, accounting for 64.7% of all smartphones, up from 623.2 million units in 2017 and 42.5% share, according to IDC. By 2022, shipments of these larger screen smartphones will jump to 1.391 billion units, or 84.5% of overall shipment volume.

The industry is experiencing a shift toward higher aspect ratios, at or near 18:9, which require a larger screen to support the widescreen viewing angle. While the 18:x aspect ratio started with flagship and higher-end devices in 2017, it began to appear in lower-priced devices in 2018, including some sub-$200 handsets, says IDC. By Q2 2018, 16:9 smartphones were overtaken by 17.5:9 aspect ratios (or higher) for the first time. As Chinese brands, such as Huawei, OPPO, vivo, and Xiaomi, expand their international presence, it is likely the focus on large screens and aspect ratios will remain a focus across their entire portfolio. The anticipation of the new iPhone models this fall, two of which IDC believes will be above six inches and available for shipment in the second half of 2018, will act as another catalyst toward driving these important display trends.

“With two out of three new iPhones expected to be larger than 6 inches, Apple will not be left behind in the 2018 race for increased screen real estate,” said Melissa Chau, associate research director with IDC’s Worldwide Quarterly Mobile Device Trackers. “You could say the term ‘phablet’ is becoming less relevant now that most smartphones will ship with larger screens, and when folding screens start coming into play in the medium term, this screen trend will evolve in new directions.”

From a geographic perspective, the China market is finally showing signs of recovery and while IDC still expects the largest market in the world to be down 6.3% in 2018 (slightly worse than the 2017 downturn), that is mainly attributed to an extremely poor first half, which saw smartphone volumes down 11%. The second half is expected to improve to a decline of 2% before returning to positive growth in 2019, says IDC. Asia/Pacific as a region still holds plenty of market growth led by India and Indonesia, which are expected to grow shipments in 2018 by 14.4% and 15.4% respectively.

“We still believe the smartphone market has some healthy growth in the years to come, although finding and competing in those markets and segments is increasingly more challenging,” said Ryan Reith, program vice president with IDC’s Worldwide Mobile Device Trackers. “With the US-China trade tariffs changing and unfolding daily it is hard to pinpoint what the exact impact on the market will be, but for the time being OEMs are pushing forward with important initiatives that include the previously mentioned traction around bigger and better displays. But the industry also has 5G knocking at its doors, and many OEMs, retailers, telcos, and supply chain partners will be working dligently to ensure consumers see the need to upgrade when products and services are readily available.”

Android: Android’s smartphone share will hover around 85% share throughout the forecast. Volumes are expected to grow at a five-year CAGR of 2.4%, with shipments approaching 1.41 billion in 2022, according to IDC.

Android average selling prices (ASPs) are growing at a double-digit pace. IDC expects Android ASPs to grow 11.4% in 2018 to $262, up from $235 in 2017. IDC expects this upward trajectory to continue through the forecast, but at a more tempered low single-digit rate from 2019 and beyond. This is a sign of many OEMs slowly migrating their user base upstream to the slightly more expensive handsets. Overall this is a positive sign that consumers are seeing the benefits of moving to a slightly more premium device than they likely previously owned. The broad range of colors, screen sizes, features, and brands are a large catalyst for this movement.

iOS: iPhone volumes are expected to grow by 2.1% in 2018 to 220.4 million in total. IDC is forecasting iPhones to grow at a five-year CAGR of 2.0%, reaching volumes of 238.5 million by 2022. With larger screen iOS smartphones coming up for launch in the second half of 2018, IDC has shifted greater volumes into the 6-inch to sub-7-inch screen size forecast for iOS. Products are on schedule to begin shipping in the third quarter and ramping up into the fourth quarter of 2018, with volumes growing to account for half of all iPhones shipped by 2022.