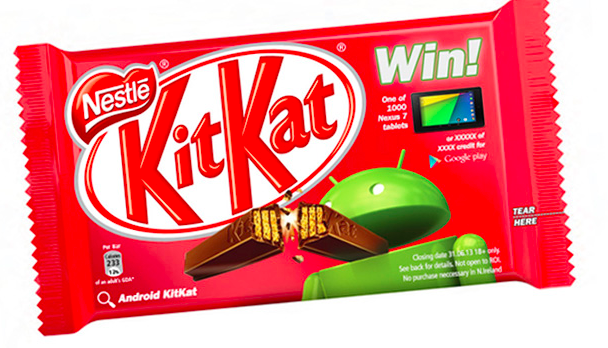 Google has ended months of online speculation about the name of the latest version of its Android mobile operating system by revealing it will be called ‘Android KitKat’, after Nestlé’s popular chocolate and wafer confectionery.

Android has been developed by the company’s engineers under sweet-themed names ever since the release of Android Cupcake in 2009 and continuing in alphabetical order until the most recent version, Android Jelly Bean.

The news that the letter ‘K’ will be dedicated to Nestlé’s KitKat comes as a surprise, ‘Android Key Lime Pie’ was the confectionary expected.

Marc Vanlerberghe ( Director, Android Marketing, Google): We couldn’t imagine a better name for our Android K release than the tasty chocolate that’s been a favourite among the team since the early days of Android.

To mark the release of Android KitKat, more than 50 million specially branded KitKat bars will be available in 19 countries including Australia, Brazil, Germany, India, Japan, Dubai, Russia, the United Kingdom and the United States.

Nestlé’s branding partnership with Google is the company’s latest move in its ambition to leverage digital technology and online content to get closer to its consumers. Earlier this year, Nestlé acquired its first-ever piece of online content property, the Petfinder website in the United States.