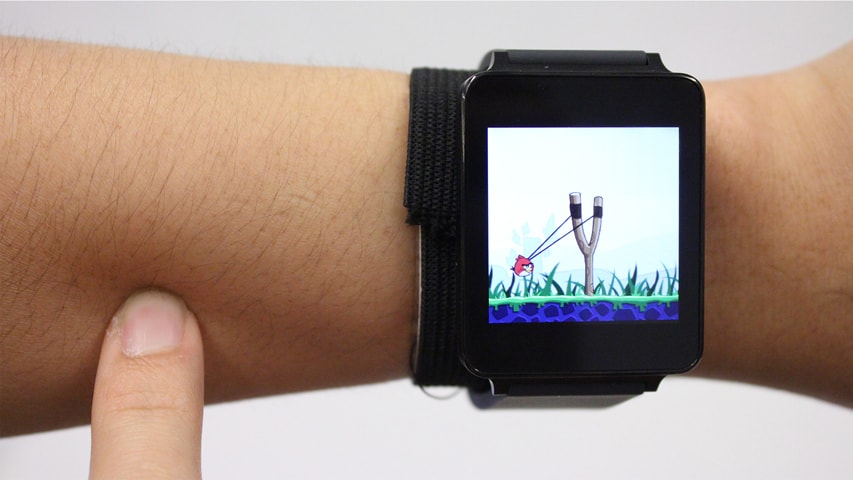 Researchers at Carnegie Mellon University (CMU) have developed a wearable technology that lets the human skin be used as a touchscreen. Called SkinTrack, the technology developed by the Human-Computer Interaction Institute, allows for continuous touch tracking on the hands and arms. It can also detect touches at discrete locations on the skin, enabling functionality similar to buttons or slider controls. SkinTrack makes it possible to move interactions from the screen onto the arm, providing much larger interface, say the researchers.

SkinTrack consists of a ring, which emits a continuous high frequency AC signal, and a sensing wristband with multiple electrodes. Due to the phase delay inherent in a high-frequency AC signal propagating through the body, a phase difference can be observed between pairs of electrodes. SkinTrack measures these phase differences to compute a 2D finger touch coordinate.

SkinTrack could be used as a game controller, to scroll through lists on the smartwatch, to zoom in and out of onscreen maps, and to draw, according to the researchers. A number pad application enabled users to use the back of the hand as a dial pad for the onscreen number pad; hovering a finger over the hand acts as a cursor, highlighting numbers on the screen to aid in targeting touch points.

There are some limitations – like power.  Signals also tend to change as the device is worn for long periods,  because of sweat and hydration.

You can watch a video of SkinTrack here: