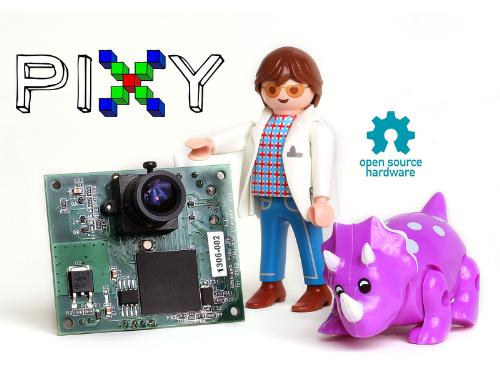 Austin, Texas-based Charmed Labs is partnering with Carnegie Mellon University (CMU) to launch a vision sensor, called Pixy, that can learn how to find objects.  As part of a Kickstarter campaign, Pixy is available by contributing $59 or more.

Pixy is a camera about half the size of a business card that can detect objects that users “train” it to detect. Training is accomplished by holding the object in front of Pixy’s lens and pressing a button. Pixy then finds objects with similar color signatures using a dedicated dual-core processor that can process images at 50 frames per second.

Pixy can report its findings, which include the sizes and locations of all detected objects, through one of several interfaces: UART serial, SPI, I2C, digital or analog I/O. Pixy can also detect hundreds of objects from seven different color signatures.

Since Pixy has several communication options, it can talk to practically any micro-controller, or even simple devices such as relays, servos or lights, according to Charmed Labs.

Charmed Labs focuses on providing advanced embedded solutions for educational use.  Previous partnerships between CMU and Charmed Labs include the GigaPan robotic camera mount and the Telepresence Robotics Kit (TeRK).