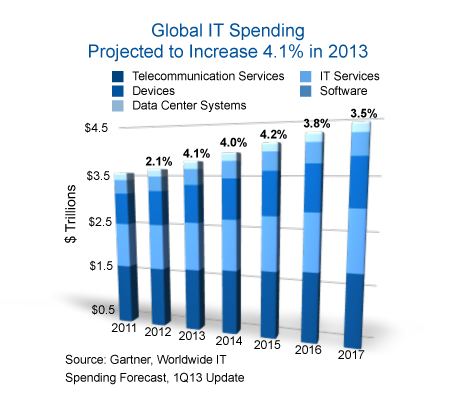 Worldwide IT spending is projected to total $3.8 trillion in 2013, a 4.1 percent increase from 2012 spending of $3.6 trillion, according to a forecast by Gartner.

Currency effects are less pronounced this quarter with growth in constant dollars forecast at 4 percent for 2013. “Although the United States did avoid the fiscal cliff, the subsequent sequestration, compounded by the rise of Cyprus’ debt burden, seems to have netted out any benefit, and the fragile business and consumer sentiment throughout much of the world continues,” said Richard Gordon, managing vice president at Gartner. “However, the new shocks are expected to be short-lived, and while they may cause some pauses in discretionary spending along the way, strategic IT initiatives will continue.”

Worldwide devices spending (which includes PCs, tablets, mobile phones and printers) is forecast to reach $718 billion in 2013, up 7.9 percent from 2012. Despite flat spending on PCs and a modest decline in spending on printers, a short-term boost to spending on premium mobile phones has driven an upward revision in the devices sector growth for 2013 from Gartner’s previous forecast of 6.3 percent.

The outlook for 2013 for data center systems spending is forecast to grow 3.7 percent in 2013, down 0.7 percent from Gartner’s previous forecast. This reduction is largely due to cuts to the near-term forecast for spending on external storage and the enterprise in the economically troubled EMEA region.

Worldwide enterprise software spending is forecast to total $297 billion in 2013, a 6.4 percent increase from 2012. Although the growth for this segment remains unchanged from Gartner’s previous forecast, this belies significant changes at a market level, as stronger growth expectations for database management systems (DBMS), data integration tools and supply chain management compensate for lower growth expectations for IT operations management and operating systems software.

While the outlook for IT services remains relatively unchanged since last quarter, continued hesitation among buyers is fostering hypercompetition and cost pressure in mature IT outsourcing (ITO) segments and reallocation of budget away from new projects in consulting and implementation.

The global telecom services market continues to be the largest IT spending market and will remain roughly flat over the new several years, with declining spending on voice services counterbalanced by strong growth in spending on mobile data services.