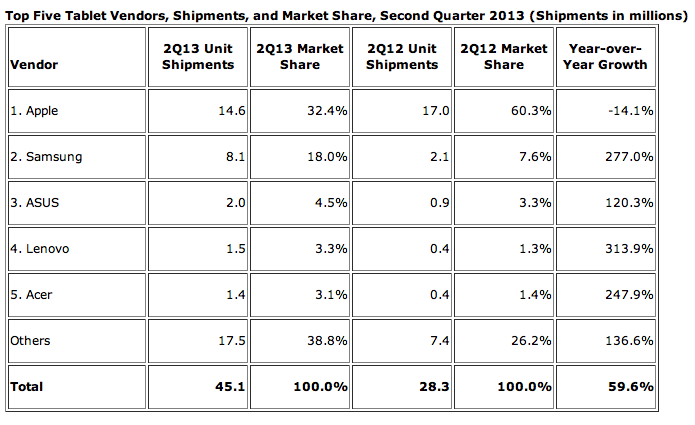 Worldwide tablet shipment growth slowed in the second quarter of 2013 (2Q13), according to preliminary data from the IDC worldwide quarterly tablet tracker.

Worldwide tablet shipments finally experienced a sequential decline as total volumes fell -9.7% from 1Q13. However, the 45.1 million units shipped in the second quarter was up 59.6% from the same quarter in 2012, when tablet vendors shipped 28.3 million devices, according to IDC.

Lacking a new product launch in March to help spur shipments, Apple’s iPad saw a lower-than-predicted shipment total of 14.6 million units for the quarter, down from 19.5 million in 1Q13. In years past, Apple has launched a new tablet heading into the second quarter, which resulted in strong quarter-over-quarter growth. Apple is expected to launch new tablet products in the second half of the year, a move that better positions it to compete during the holiday season.

Tom Mainelli (Research Director, Tablets, IDC): A new iPad launch always piques consumer interest in the tablet category and traditionally that has helped both Apple and its competitors.

Not all vendors experienced a slowdown during the quarter. Lenovo and Acer both re-entered the top five this quarter. Lenovo continued to make headway into the world of mobility and for the first time had shipments surpass the million unit mark in a quarter, shipping a total of 1.5 million devices. This was up 313.9% from a year ago and enough to capture 3.3% market share. Rounding out the top 5 was Acer, which shipped 1.4 million tablets in 2Q13 for 247.9% year-over-year growth and an increase of 35.4% over the first quarter of 2013.

The tablet market is still evolving and vendors can rise and fall quickly as a result, says IDC. Apple aside, the remaining vendors are still very much figuring out which platform strategy will be successful over the long run. To date, Android has been far more successful than the Windows 8 platform. However, Microsoft-fueled products are starting to make notable progress into the market.