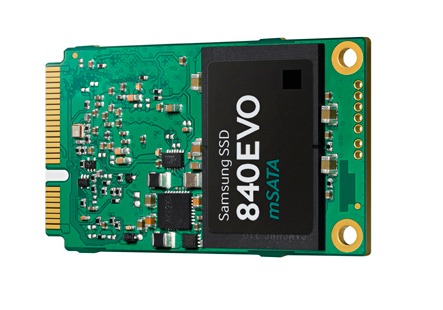 The new SSD features the compact mSATA form factor, which is approximately a quarter size of a 2.5-inch SSD. It utilizes 128GB NAND flash memory based on 10 nanometer class process technology. To form a 1TB version SSD, a total of four flash memory packages are used, each package having 16 layers of 128Gb chips. Based on the advanced memory technology, the 1TB mSATA SSD comes in a thickness of 3.85 millimeters and a weight of 8.5 grams, which are approximately 40 percent and a twelfth of a typical hard disk drive (HDD) respectively.

The 840 EVO mSATA SSD can be used along with another data storage device embedded on a notebook, either HDD or SSD, as long as the notebook has the mSATA socket. Applying 256-bit AES keys, the mSATA SSD is compliant with TCG Opal and IEEE 1667 standards.

The 840 EVO mSATA SSD is an extension of the 840 EVO line-up which was introduced in July, and the newer models will be available this month globally.