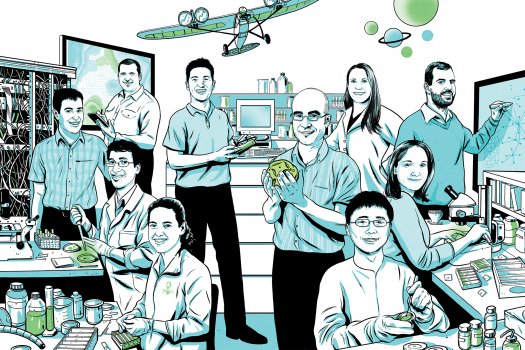 Each year, Popular Science publishes a list of young scientists and engineers and names them the Brilliant Ten. Like the 110 honorees before them, the members of this year’s class are dramatically reshaping their fields and the future, says the science and technology magazine.

Most communication data, such as Web, phone, and television, runs through a network of fiber-optic cables. Data traffic, however, is expected to outgrow infrastructure within the decade. In order to avoid slow and garbled transmissions, Nicolas Fontaine, an optical engineer, invented a new kind of multiplexer. The device bundles multiple inputs into one stream by routing different light beams along carefully planned pathways, ultimately cramming more data into a single optical fiber than ever before. Easily scalable and cheap to produce, Fontaine’s invention has already sent six light streams down 497 miles of fiber without losing any data.

Meteorologist Scott Collis took on the task of building open-access data tools that convert the raw data from radar databases into formats that climate modelers can use. He is now preparing a new radar network with the U.S Department of Energy.

Mya Breitbart, University of South Florida
Achievement: Mapping the genomes of an entire ecosystem at once

Viruses are the most abundant entities on the planet and among the most mysterious. Mya Breitbart, a microbial ecologist at the University of South Florida, has figured out a way to quickly decipher what they are and where they’re going. Rather than isolate individual virus species from a sample (there are up to 10 billion viruses in a liter of seawater), she extracts all the genetic material present, chops it into smaller pieces, and sequences those pieces simultaneously.

Pedro Reis’s lab at MIT looks more like a playroom than a workspace. It is filled with toy-like objects like squishy spheres and silicone rods. In their flaws, Reis sees strengths: the basis for his soft agile robots and joints manufactured from a single piece of material. He also gleans lesson from ordinary phenomena and applies them to his work. Through his studies, he learns the fundamental principles of everyday mechanics and transfers this understanding to the solution of engineering problems.

Caltech astronomer Heather Knutson spends her days figuring out what a cosmic traveler may need to pack. She is in essence the first exoplanet meteorologist determining the local temperature and weather and even the composition of the atmosphere on different planets. So far, she has looked at the big gaseous planets known as hot Jupiters orbiting close to their stars.

Feng Zhang helped develop techniques called TALE and CRISPR, which create transgenic or otherwise genetically modified organisms with unprecedented efficiency. Using these methods, he can make a transgenic mouse in three weeks while normal methods require more than six months. His invention has dramatically sped up the study of genetics and disease sparking almost 2,000 labs to request information about CRISPR since January.

David Schmale hunts killer airborne pathogens with drones. The data he has gathered explains how pathogens ride on wind currents and also gives insights into an almost unknown ecosystem far above our heads. He developed his unmanned aerial vehicles with a colleague at Virginia Tech as an alternative to costly manned research flights.

Arjun Raj, University of Pennsylvania
Achievement: Revealing the inner workings of a cell

RNA molecules, which carry the genetic information from DNA, reveal which genes are turned on and how often they are active. Arjun Raj and his team at the University of Pennsylvania invented a technique to track specific RNA strands. Using this technique, cell biologists can see subtle events happening in genes that were until now not visible to scientists.

Justin Cappos has developed a completely different way to cloud compute. In typical cloud computing, users connect to a powerful centralized data center. But Cappos’s cloud is less of a dense thunderhead and more of a fog. His system, called Seattle, connects devices directly to one another in a decentralized network, relaying information more quickly than it could through a single, often distant exchange point. The cloud lets you use a little bit of disc storage, network, memory, and CPU in an isolated, safe way. By the end of 2012, Seattle had 20,000 users. Cappos and his team are now working on software that could access the sensors in smartphones.

Andrea Armani, a chemical engineer at the University of Southern California, develops sensors that are speeding scientific discovery across many fields. They may also serve as detectors for biological weapons, waterborne pathogens, or radioactivity. The devices outstrip the capabilities of standard optics. Some can withstand temperature swings without losing precision; others can pick up proteins in dry air.