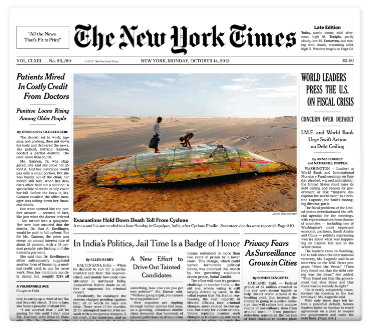 The New York Times has launched a new Today’s Paper Web application. Built with HTML 5 technologies, the responsive app is developed for readers who value the regular schedule, structured composition and totality of the daily print edition, says the NYT.

The app includes sections, articles and photos found in the print edition, as well as some of the video. Users can access editions from the previous seven days as well.

The Today’s Paper app replaces The Times’s Web App for iPad, which launched as a beta product in September 2012, and is available exclusively to NYTimes.com digital subscribers and to Times home delivery subscribers.