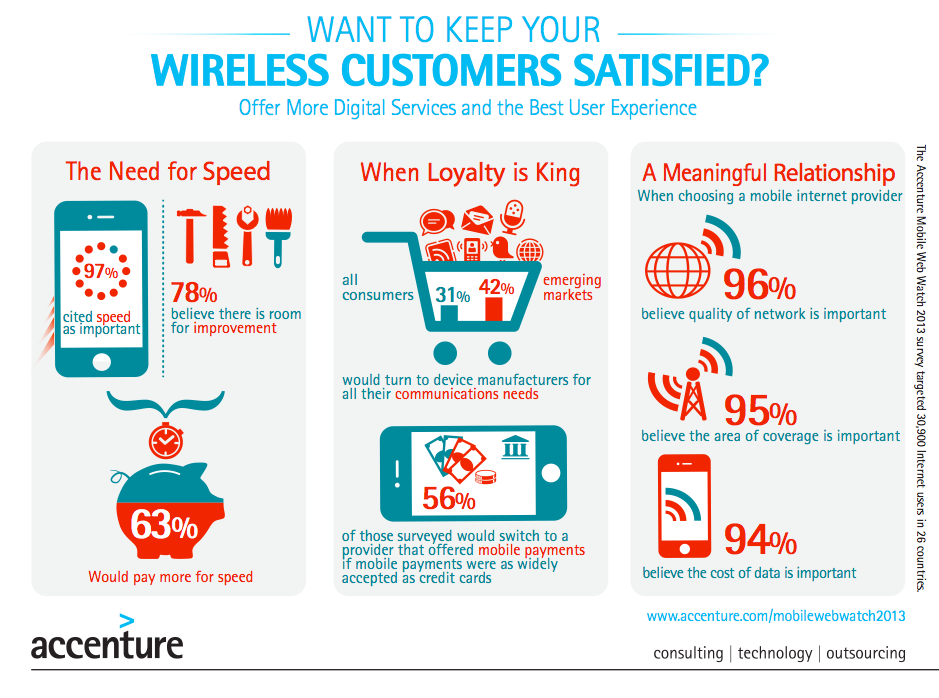 The global survey found that the speed of mobile Internet connections was most often cited by all consumers as the top CSP differentiator. Ninety-seven percent of all respondents cited speed as important, and 78 percent said there is some room for improvement. In addition, nearly two-thirds (63 percent) of all respondents said they would pay additional monthly fees for mobile Internet service that would be 10 times faster than their current connection, indicating that providers’ investments in high-speed data networks, such as 4G, could reap benefits.

However, there are disparities in consumers’ willingness to pay for more speed. For example, in mature markets, the willingness to pay extra for 4G is lower (57 percent of all respondents in these markets), except in Italy (71 percent) and Finland (70 percent) In emerging markets, three-quarters (76 percent) of mobile Internet users would pay more for 4G; customers in Brazil and Russia (83 percent in each country) are willing to pay more.

In addition to the topic of transmission speeds, the survey also showed that providers must deliver an outstanding quality of service to satisfy customers. Almost all respondents (96 percent) said the quality of network is important, closely followed by its area of coverage (95 percent) and connection speed (95 percent).  94 percent of respondents said the cost of data is slightly less important than quality, coverage, or connection speed, and even less, 89 percent, cited customer service as being important.

Monte Hong (Managing director, Accenture): These days, every business is a digital business, and consumers are looking for the kinds of personal relationships that were typical years ago, between shoppers and their neighborhood store.

A tug-of-war for consumers’ loyalty

The survey revealed that providers will continue to compete for customer loyalty, particularly from “non-traditional” competitors that include device manufacturers and financial institutions.

When asked who they prefer to supply their “packaged” communications bundles encompassing audio and video calls, messaging, e-mails, and access to applications on their mobile devices, 31 percent of all consumers surveyed – and 42 percent in emerging markets – said they would turn to device manufacturers for all their communications needs.

For cloud services, almost half (46 percent) of all respondents – and 54 percent in emerging markets — would want their mobile provider to offer cloud-based capabilities.

The survey showed that location-based services are also rising in importance with customers. Among those consumers surveyed who have access to the Internet via a smartphone or tablet, 72 percent would disclose their location on their mobile device. Nearly half would do so when searching for information on nearby shops or similar facilities, and 35 percent would disclose their location for discounts or coupons from retailers in their local area.

When asked about using their smartphones to make phone calls over the Internet, 32 percent of all smartphone users in both mature and emerging markets regularly use their smartphones to make Internet-based calls. However, 39 percent of those surveyed in emerging markets regularly do so, especially among those who own Apple Phones (44 percent globally) and those already on 4G networks (41 percent globally). In addition, if network connection speed and quality improves, almost half (47 percent) of all respondents said they would use their mobile phone to make Internet calls, with 60 percent in emerging markets as the most likely.

“There are certainly challenges for providers, especially in the face of technology developments – including mobility, analytics, cloud, digital services, and social networks – that are accelerating convergence. As a disruptive force, convergence is a threat to the unprepared, but CSPs can compete by assuring quality of service as they address customers’ demands, manage new traffic patterns or reconsider the structure of data plans,” says Mr. Hong. “There are also potential opportunities in mobile payment services – perhaps by collaborating with financial institutions. CSPs can also consider cloud-based and location-based services, using tools like analytics to help ensure deep insight into subscribers’ behavior, which will help CSPs deliver an innovative, consistent digital experience to their customers.”