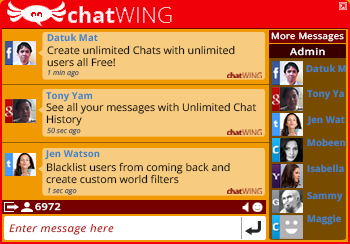 With the vast numbers of sites competing for the same keyword phrases nowadays, it is not surprising to think that site owners would do everything they can to stand on the top of Google’s search rankings. That’s because with a higher ranking, they draw in more traffic towards their site – increasing their chances of gaining more profit. As such, they optimize their site to the fullest and make use of different marketing strategies to do so. Chatwing, a free live chat application, can also help in doing so, in more ways than one.

Chatwing is a great chatting tool anyone can use or embed on their site with ease. It requires minimal effort as they only need to copy a few bits of the chatroom’s HTML code to their site to make it go live. Once operational, it can open up a new window of opportunity for them as their viewers can now communicate with them directly. They can speak their thoughts and questions to them about the site and the site owners in turn, can provide an answer – all of that through real time chat.

However, the real beauty of Chatwing chat software mostly comes from the features that compliment it from within. These features can greatly augment its capabilities, giving the viewers more than a great chatting experience, thus providing customer satisfaction with ease. Giving the viewers freedom to choose between their social media accounts (Facebok, Twitter, Yahoo and Google) to join in the chatroom is just one of these features.

Here’s another feature of Chatwing that can help in potentially increasing the sites traffic – Network. This syncs the chatroom with the other live ones under one channel, thus giving the users the capability to chat with the other people using the chatroom from the sites and vice versa. By chatting within the people inside it, the users have the chance to potentially increase their site traffic by inviting people to their site.

Chatwing has more features lined up under its belt, and its developers are constantly making it better. Setting it up on a site will make encourage people to chat with each other and start a great chatting environment within the site, thus increasing its interaction – another factor in SEO. For people that don’t have a site, they can still use it without the need of embedding it by accessing the chatroom through its URL link. For site owners on the search for a chatting tool to compliment their site, choosing Chatwing is surely an action they won’t regret.

(Aaron Kong is developer of the Chatwing chat software service and an open source communication advocate. That is all he is saying till the time Chatwing comes out of stealth mode.)

‘My Story’ features entrepreneurs talking about their startups. We do not edit the content, nor do we fact-check. This is not an advertisement, and you do not have to pay to be featured. Do you want to tell your story? Write to us at [email protected]!