More
Home Consumer Microsoft Just Bought A Huge Chunk Of Nokia In A €5.44B Deal 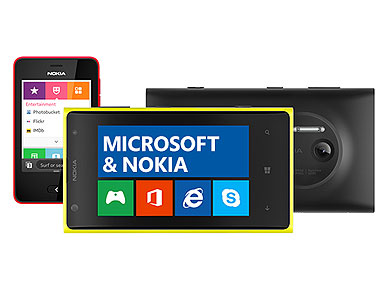 Microsoft just bought a huge chunk of Nokia. The Redmond giant is in the process of purchasing all of Nokia’s Devices & Services business, and will license Nokia’s patents, including the company’s mapping services.

Steve Ballmer (Chief executive officer, Microsoft):  It’s a bold step into the future – a win-win for employees, shareholders and consumers of both companies. Bringing these great teams together will accelerate Microsoft’s share and profits in phones, and strengthen the overall opportunities for both Microsoft and our partners across our entire family of devices and services.

Microsoft says it will draw upon its overseas cash resources to fund the transaction. The transaction is expected to close in the first quarter of 2014, subject to customary approvals and other closing conditions.

Stephen Elop is stepping aside as Nokia president and CEO to become Nokia executive vice president of Devices & Services.  At closing, approximately 32,000 people are expected to transfer to Microsoft, including 4,700 people in Finland and 18,300 employees directly involved in manufacturing, assembly and packaging of products worldwide.