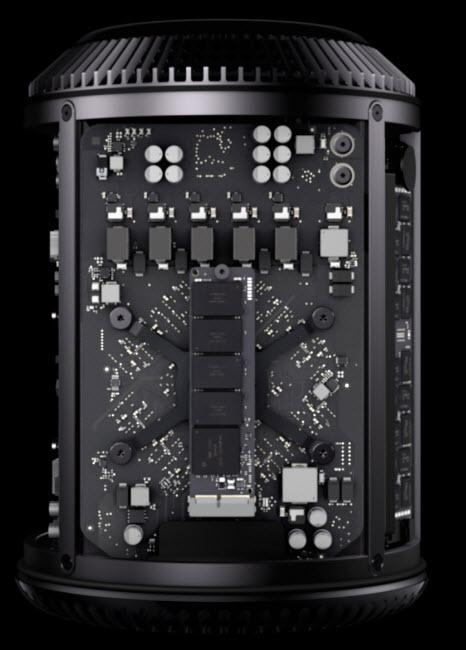 Apple showed off the new Mac Pro on Tuesday. The 9.9-inch tall Mac Pro features Intel Xeon processors with up to 12 cores, dual workstation-class GPUs, six Thunderbolt 2 ports, PCIe-based flash storage and ECC memory. Prices start from $2,999, and the devices will be available in December.

Philip Schiller (Senior vice president, Worldwide Marketing, Apple): The new Mac Pro is our vision for the future of the pro desktop, everything about it has been reimagined and there has never been anything like it.

The new Mac Pro is architected around a unified thermal core, that allows the system to efficiently share thermal capacity across all the processors, says Apple.

A look at the new Mac Pro features:

Configure-to-order options include 8-core or 12-core Intel Xeon E5 processors, AMD FirePro D700 GPUs with 6GB of VRAM, up to 64GB of memory, and up to 1TB of PCIe-based flash storage.

“It looks like a garbage can!” was among the reactions the Cupertino giant got, when it first unveiled the machines in June. Apple fanatics in Japan went a step further, and launched a garbage can that looked like the Mac Pro, which became an instant Internet hit.