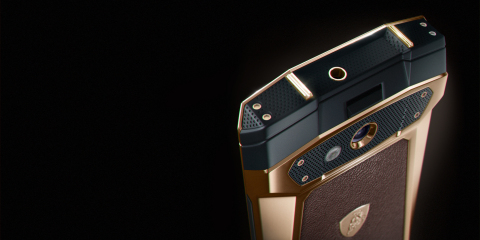 Starting December, we can own a Lamborghini model for a mere $4,000. The Italian luxury Group has launched a limited-edition smartphone, Antares, which will be available next month. Lamborghini says it will subsequently release a further series of mobile products “aimed at successful independent people searching for a unique identity.”

The Tonino Lamborghini smartphone falls in the ‘techno-luxury’ mobile segment, according to the company. The technology part includes a quad-core 1.5 GHz processor, 2 GB of RAM, 32 GB of internal memory and a 32 GB MicroSD card slot in the 13.5mm smartphone. The sound system is provided by an in-built Yamaha amplifier and speakers. Antares also has a 13-megapixel rear and 5-megapixel front-facing cameras with full HD video (1080p).

Now for the luxury part. The Antares uses the Android 4.2 Jelly Bean platform with a complimentary interface designed exclusively for Tonino Lamborghini. The smartphones  will be released in limited edition, with a unique serial number appearing on the back of every phone. The body of the smartphone and casing is decorated with the classic Tonino Lamborghini symbol of a raging bull inside the shield.

The Antares will begin shipping in December to the Russian Federation and China. The smartphone will be available in Italy, the United Kingdom, and the United States from Spring 2014.