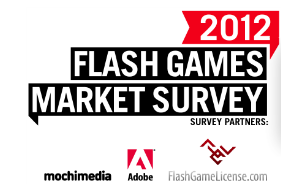 Improvements in technology, and lowered barriers to entry, enabled indie game developers in 2012 to address and develop for more platforms than ever before. 95% developers continued to make games for the browser and 86% planned to make mobile games.

According to the results of the 2012 flash games market survey, from Mochi Media, this expansion has been enabled by a number of factors, including improved monetization capabilities and best practices across development platforms.

Mobile has emerged as a strong monetization channel as app sales and in-game ads continue to mature, and as consumers increasingly turn to mobile devices as a primary gaming platform.

When it comes to mobile, game developers target the iOS and Android stores nearly equally, with 81% targeting iOS and 78% targeting Android. Additionally, the majority developers indicated that “marketing” is their biggest pain-point in mobile game development.

The study also reveals the continuing trend of decentralization and internationalization of indie game developers. The number of developers in the United States, Great Britain and Canada — which accounted for 37 percent of all developers last year and 58 percent 3 years ago — only make up 32 percent of respondents this year. Russia (6%), China (6%), Ukraine (4%), India (3%) and Brazil (3%) represent the largest countries for indie game development worldwide.

Finally, 63% of respondents indicated that they develop games for online play to gauge market response and readiness before developing for mobile platforms. This trend was first discovered last year, and has increased from 60%.

The 2012 Flash Games Market Survey was conducted by Mochi Media in partnership with Adobe and FGL.com. The survey included responses from 1,359 Flash game developers and publishers.