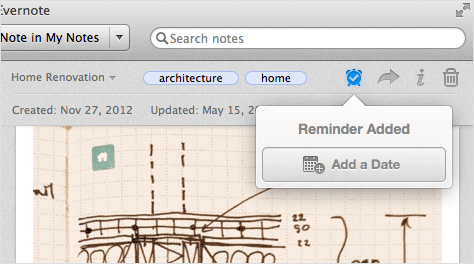 Evernote has launched a Reminders feature.

The company says it has rolled three of their most requested features rolled into one – in-app and email alarms, note based to-do lists, and the capability to pin notes to the top of a list. Reminders sync across all versions of the app that support the new feature, and anyone who has access to your notebook is able to subscribe to be notified when notes come due.

The Reminders feature is currently available on Evernote for Mac, iOS and Evernote Web. Evernote Business users can also use the features.