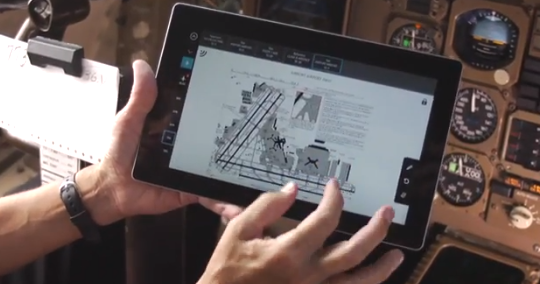 Device rollout to pilots flying the Boeing 757 and Boeing 767 fleets will start later this year, and all Delta cockpits are projected to be paperless by the end of 2014.

The Surface 2 will run on the Windows RT 8.1 platform and provide flight crews real-time access to charts, reference documents, and checklists while saving the airline an estimated $13 million per year in fuel and associated costs, says Microsoft.

Delta expects to receive approval from the FAA to use the tablets during all phases of flight next year, a process that follows an extensive period of testing on board Boeing 757 and Boeing 767 aircraft. Approvals for all fleet types are expected by the end of the year.

Rolling out the Surface 2 tablets across the entire fleet and eliminating paper in the cockpit means the carrier will remove the traditional 38-pound pilot flight bags maintained on board aircraft for each pilot. The weight reduction is expected to reduce fuel usage by an estimated 1.2 million gallons per year which translates to a 26 million pound reduction in carbon emissions — the equivalent of taking more than 2,500 passenger cars off the road. Additionally, the tablet will cut the airline’s paper usage by 7.5 million sheets annually and save an estimated 900 trees each year, says Microsoft.

The move to a paperless cockpit follows Delta’s launch of handheld devices for its 19,000 flight attendants, which run on Windows Phone-based software. Delta flight attendants began using the Nokia Lumia 820 in August.