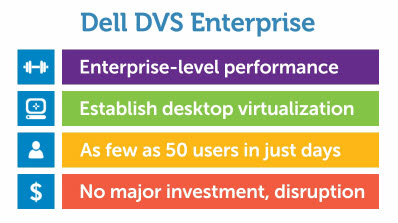 DVS Enterprise for Windows Server 2012 is an on-premises solution to size and deliver pre-tested Dell hardware components to support specific configurations of over 1,000 remote desktop sessions or up to 600 VDI users. It is ideal for organizations such as schools and universities that have existing Microsoft and education licensing and purchasing agreements and are interested in a limited-sized deployment, along with a mix of remote desktop sessions and virtual machines.

DVS Enterprise for Windows Server 2012 is available today in the U.S., Canada, U.K., France, Germany and Netherlands via direct and channel partners from less than $300 per seat  for remote desktop sessions.