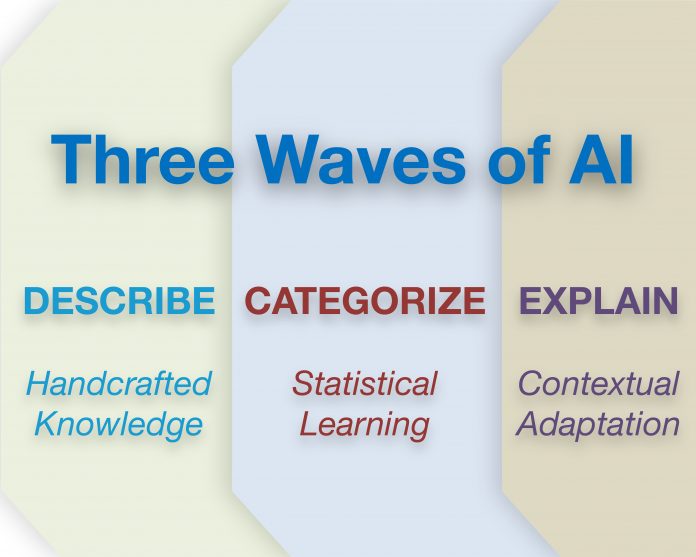 DARPA has announced a multi-year investment of more than $2 billion in new and existing programs, called the ‘AI Next’ campaign.

“With AI Next, we are making multiple research investments aimed at transforming computers from specialized tools to partners in problem-solving,” said Agency director, Dr. Steven Walker. “Today, machines lack contextual reasoning capabilities, and their training must cover every eventuality, which is not only costly, but ultimately impossible. We want to explore how machines can acquire human-like communication and reasoning capabilities, with the ability to recognize new situations and environments and adapt to them.”

DARPA is currently pursing more than 20 programs that are exploring ways to advance the state-of-the-art in AI, pushing beyond second-wave machine learning techniques towards contextual reasoning capabilities. In addition, more than 60 active programs are applying AI in some capacity, from agents collaborating to share electromagnetic spectrum bandwidth to detecting and patching cyber vulnerabilities, the agency said in a statement.

Under AI Next, key areas to be explored may include automating critical DoD business processes, such as security clearance vetting in a week or accrediting software systems in one day for operational deployment; improving the robustness and reliability of AI systems; enhancing the security and resiliency of machine learning and AI technologies; reducing power, data, and performance inefficiencies; and pioneering the next generation of AI algorithms and applications, such as “explainability” and commonsense reasoning, says DARPA.

In addition to new and existing DARPA research, a key component of the campaign will be DARPA’s Artificial Intelligence Exploration (AIE) program, first announced in July 2018. AIE constitutes a series of high-risk, high payoff projects where researchers will work to establish the feasibility of new AI concepts within 18 months of award, says DARPA.