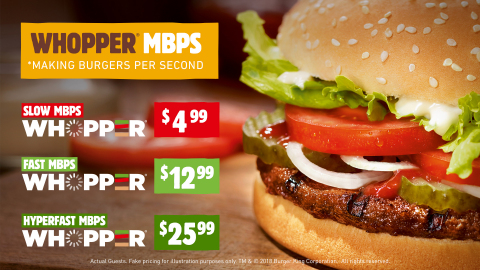 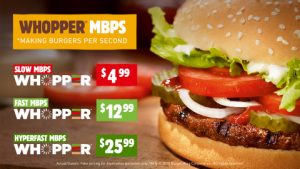 Burger King responded to the recent net neutrality repeal with a marketing initiative that according to the company shows how ordering burgers would work, if the world of fast food followed the world of an internet without neutrality.

In a video released by the company, during the Whopper Neutrality experiment, Burger King restaurant guests that ordered their sandwiches at the regular price had to wait a long time to receive their orders. Other customers received their orders swiftly, because they paid increased fees for faster service. MBPS of course stands for ‘Making Burgers Per Second.’

“We believe the internet should be like Burger King restaurants, a place that doesn’t prioritize and welcomes everyone,” said Fernando Machado, global chief marketing officer with the burger company.

PS – We can support net neutrality by signing a petition at Change.org/SavetheNet.