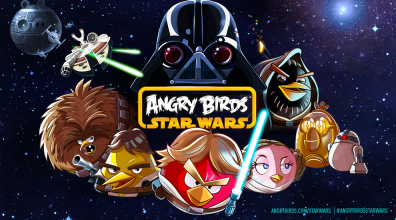 Rovio Entertainment and Lucasfilm are coming together to form a blockbuster entertainment franchise collaboration, Angry Birds Star Wars. Launching worldwide on November 8, the partnership will combine the classic Angry Birds and Angry Birds Space with the characters, stories and settings of the epic space fantasy, Star Wars.

From the deserts of Tatooine to the depths of the Death Star – the game and merchandise will feature the Angry Birds characters starring as the iconic heroes of the beloved Saga.

In addition to the game, this fall will also see the unveiling of a massive retail launch for Angry Birds Star Wars. Merchandise ranging from Halloween costumes and apparel to action figures and collectible plush toys will be available at select retailers, starting October 28.

Catch a glimpse of the teaser trailer here.