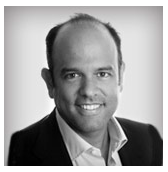 Mr. Valkin has spent the last 16 years working with early stage businesses in Europe, Israel and the US as an investor and entrepreneur. He joins General Catalyst from Accel Partners, where he was a venture partner in the firm’s London office focusing on investments in Internet and mobile services. At Accel he led investments in several early-stage companies including Dragonplay, Hailo, fiverr and Qriously, and also worked with Myheritage, Seeking Alpha and Spotify.

Prior to joining Accel, Mr. Valkin was the global head of Digital Media & New Business at television production company Endemol. He was previously a partner at venture capital firm Arts Alliance, and was a co-founder, investor and interim CEO of LOVEFiLM which was sold to Amazon.com in 2011.

Mr. Valkin was born in Johannesburg and has lived in South Africa, the US and England. He holds a degree in economics from Harvard University.