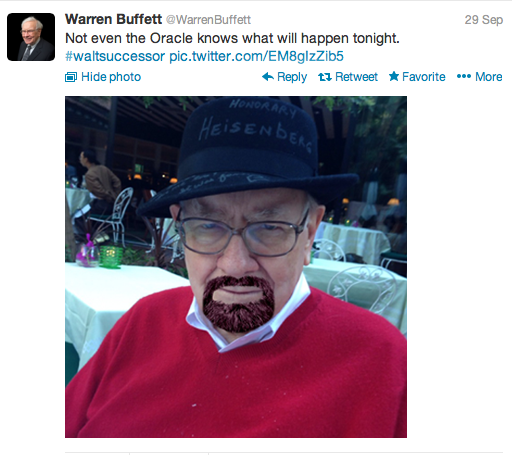 The Breaking Bad finale broke records for both its viewership and its Twitter activity.

According to SocialGuide (which measures only U.S. conversation) there were 1.24 million Tweets about the Breaking Bad (@BreakingBad_AMC) finale, with conversation peaking at 22,373 Tweets per minute (TPM) as the episode began.

Fans rallied around the #GoodbyeBreakingBad hashtag, which was displayed on air throughout the finale and was used nearly 500,000 times.

The stars of Breaking Bad also came to Twitter to bid the show, the fans, and their characters farewell. The Tweets from @BryanCranston (Walter White) and @AaronPaul_8 (Jesse Pinkman) were two of the most retweeted Tweets of the night, with 50,000+ and 27,000+ retweets respectively.

Aaron Paul held a scavenger hunt throughout Los Angeles for tickets to the finale party, and tweeted all the clues on Twitter, as well.

The Breaking Bad stars were not the only ones shining on Twitter, celebrities of all shapes and sizes also took to the microblogging site, tweeting their reactions.