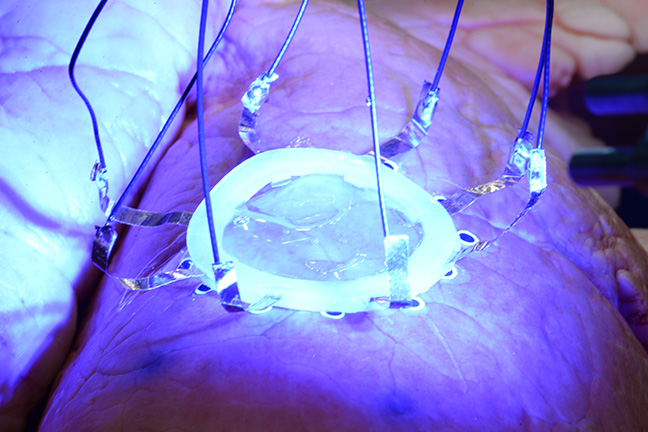 Researchers at the University of Minnesota have developed a way to 3D-print hydrogel-based sensors directly on the surface of organs, such as lungs—even as they expand and contract. It involves using motion capture technology (similar to that used in Hollywood movies), the university said in a statement.

The research team included mechanical engineers and computer scientists led by Michael McAlpine, Kuhrmeyer Family Chair Professor of Mechanical Engineering. “Along with a robot’s ability to assist a surgeon removing a tumor from a lung, for example, this technology could 3D print a sensor onto the surface of the lung to monitor how well it functions during and following the procedure,” says Mr. McAlpine.

The researchers expect the breakthrough technology to facilitate 3D printing of various functional devices “on and inside human bodies.” Examples include electrode arrays that interface with the nervous system to treat pain, bio-scaffolds with engineered cells that can regenerate tissues, and efficient and accurate application of surgical glues and skin grafts.

A key to making the technology work was the use of motion capture technology, which is similar to that used in films and video games. Moviemakers use the technique to track moving elements in a scene to insert special effects, or on actors to convert them to CGI characters. That type of “closed loop” tracking enabled addition of a new degree of freedom in 3D-printing—successfully printing a sensor onto an expanding biological surface without damaging the organ, says the university.

After fine-tuning the new system on a balloon as it was inflated and deflated, the team moved on to printing on an animal lung in the lab as it was rhythmically pulsed with air to simulate breathing. A special hydrogel embedded with electrodes around its perimeter was printed to form an electrical impedance tomography (EIT) sensor map. The device is able to stretch with the movement of the surface it is on, such as when lungs are breathing in and out—movement that the sensor can electronically relay for real-time tracking of the strain on the lung surface as it expands and contracts.