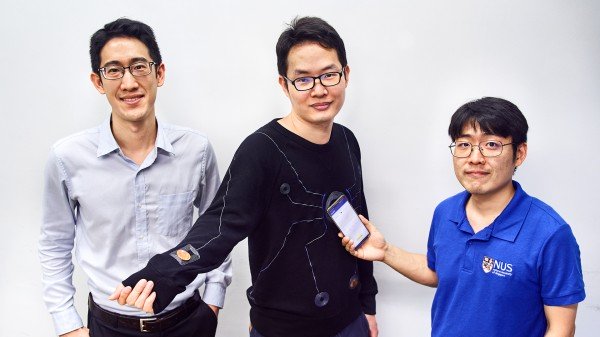 A team of researchers from the National University of Singapore (NUS) has developed a smartphone-powered suit, that can provide athletes with physiological data (posture, running gait, body temperature) while they are out on the field, according to a statement by the university.

Led by Assistant Professor John Ho, a team from the NUS Institute for Health Innovation and Technology, designed the pattern of the web-like threads to relay electromagnetic signals from a nearby smartphone to sensors on the body as far as a meter away, says NUS.

“Our smart suit works with most modern smartphones, which act as both the source of power as well as the display to view the sensor data,” said Asst Prof John Ho, who is also from the NUS Department of Electrical and Computer Engineering.

The smart suit is made up of web-like circuitry with the inductive patterns acting as hubs. Custom-made sensors placed at those hubs can transmit data back to the smartphone and are powered by the smartphone’s NFC chip, removing the need for batteries.

The current prototype can support up to six sensors per smartphone while collecting information such as spinal posture, running gait and body temperature simultaneously.