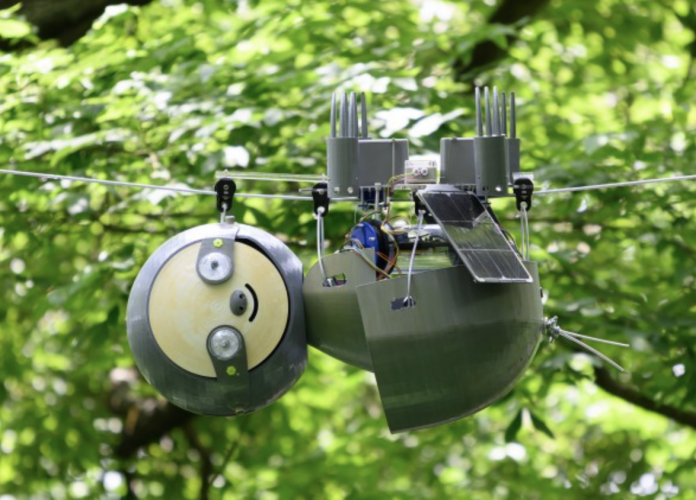 Robotics engineers at the Georgia Institute of Technology have built a slow-moving and energy-efficient robot, called (what else?) the Slothbot.

For the next several months, visitors to the Atlanta Botanical Garden will be able to observe the SlothBot in action, as the robot lingers on the trees to monitor animals, plants, and the environment below, says Georgia Tech.

Powered by solar panels, SlothBot moves along a cable strung between two large trees as it monitors temperature, weather, carbon dioxide levels, and other information in the Garden’s 30-acre midtown Atlanta forest. SlothBot demonstrates how being slow can be ideal for certain applications, according to a statement from Georgia Tech.

“SlothBot embraces slowness as a design principle,” said Magnus Egerstedt, professor and Steve W. Chaddick School Chair in the Georgia Tech School of Electrical and Computer Engineering. “That’s not how robots are typically designed today, but being slow and hyper-energy efficient will allow SlothBot to linger in the environment to observe things we can only see by being present continuously for months, or even years.”

About three feet long, SlothBot has a 3D-printed shell helps protect its motors, gearing, batteries, and sensing equipment from the weather. The robot is programmed to move only when necessary, and will locate sunlight when its batteries need recharging, says Georgia Tech.

The SlothBot launched in the Atlanta Botanical Garden is the second version of a system originally reported in May 2019 at the International Conference on Robotics and Automation. That robot was a much smaller laboratory prototype.

This research was sponsored by the U.S. Office of Naval Research through Grant N00014-15-2115 and by the National Science Foundation through Grant 1531195.