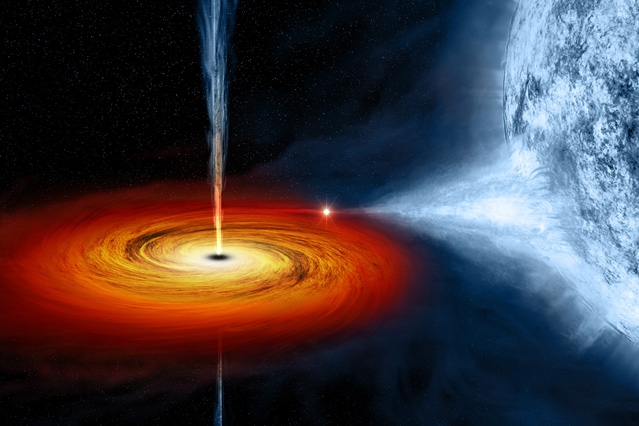 Researchers from MIT’s Computer Science and Artificial Intelligence Laboratory and Harvard University have developed a new algorithm that could help astronomers produce the first image of a black hole.

The algorithm would stitch together data collected from radio telescopes scattered around the globe, under the auspices of an international collaboration called the Event Horizon Telescope. The project seeks, essentially, to turn the entire planet into a large radio telescope dish.

“Radio wavelengths come with a lot of advantages,” says Katie Bouman, an MIT graduate student in electrical engineering and computer science, who led the development of the new algorithm. “Just like how radio frequencies will go through walls, they pierce through galactic dust. We would never be able to see into the center of our galaxy in visible wavelengths because there’s too much stuff in between.”

Radio waves also require large antenna dishes, because of their long wavelengths. The largest single radio-telescope dish in the world has a diameter of 1,000 feet, but an image it produced of the moon, for example, would be blurrier than the image seen through an ordinary backyard optical telescope.

“A black hole is very, very far away and very compact,” Ms. Bouman says. “It’s equivalent to taking an image of a grapefruit on the moon, but with a radio telescope. To image something this small means that we would need a telescope with a 10,000-kilometer diameter, which is not practical, because the diameter of the Earth is not even 13,000 kilometers.”

The solution adopted by the Event Horizon Telescope project is to coordinate measurements performed by radio telescopes at widely divergent locations. Currently, six observatories have signed up to join the project, but even twice that many telescopes would leave large gaps in the data as they approximate a 10,000-kilometer-wide antenna. The algorithm helps fill the gaps.

Ms. Bouman used a machine-learning algorithm to identify visual patterns that tend to recur in 64-pixel patches of real-world images, and she used those features to further refine her algorithm’s image reconstructions. She will present her new algorithm — which she calls CHIRP, for Continuous High-resolution Image Reconstruction using Patch priors — at the Computer Vision and Pattern Recognition conference in June.